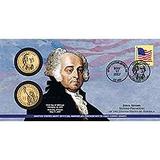 American Presidency $1 Coin Cover Series showcases the new Presidential $1 Coins! Second in the series is the 2007 John Adams $1 Coin Cover. This limited-edition cover – only 50,000 will be produced – features two John Adams $1 Coins from the first day of production, February 26, 2007. Each cover includes two $1 coins, one each from the United States Mint. Will be exactly as received from US Mint.